For this blog I’ll go through some of my best shots from Botany Bay on the Kent coast.

Botany Bay is one of seven sandy beaches in the town of Broadstairs on the Isle of Thanet. It is an especially good sunrise location and one which I have regularly visited over the years and continue to.

A dreamy take on Botany Bay with a 15 second shutter speed at dawn.

One of the reasons I like this location so much is its potential for an uncluttered, minimalist shot. With this example above, I was able to strip the scene back completely to include just the elements I wanted of sea, cliffs and sky.

It was a very high tide that morning so by going in a few feet I was able to fill my foreground with water. An exposure time of 15 seconds has made the water smooth and reflected the colour in the sky. I positioned the cliffs to the right hand side and tried to make an interesting shape out of them. Now, it gets a little trickier with the final element of the sky.

Between the months of March – October, the sun will rise out to the left of the cliffs from this view. If the clouds are in the right place there is a good chance of capturing a colourful sky; it’s just getting the right clouds in the right place that is the hard part! I tend to look at the forecast for a mixture of sun and clouds at dawn and hope for the best! 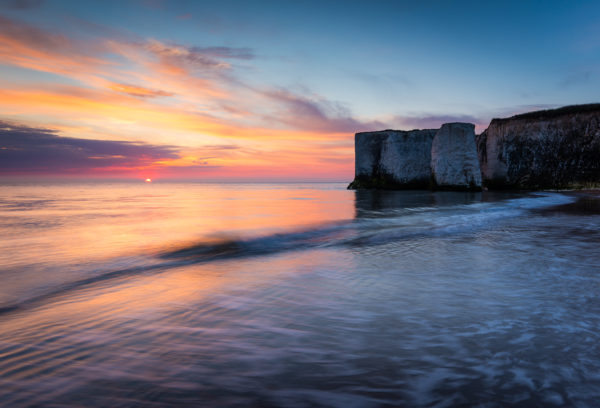 10 minutes later from the same position as the sun appeared.

This was taken ten minutes later once the sun had started to appear. By shortening the shutter to 1 second I managed to make an interesting foreground out of the surf as the wave broke.

The shot below was taken much closer to the cliff stack. The sea was a bit rougher on this morning so I didn’t fancy standing in it to try out that composition again..! Shooting from this angle with a wide angle lens highlights the gap in between the cliffs and makes the stacks dominant in the frame. A 1 second exposure did a good job of blurring the waves slightly, creating extra drama to the shot. Lastly I positioned the rising sun behind the cliff stacks which creates contrast where I wanted eyes to be drawn to. 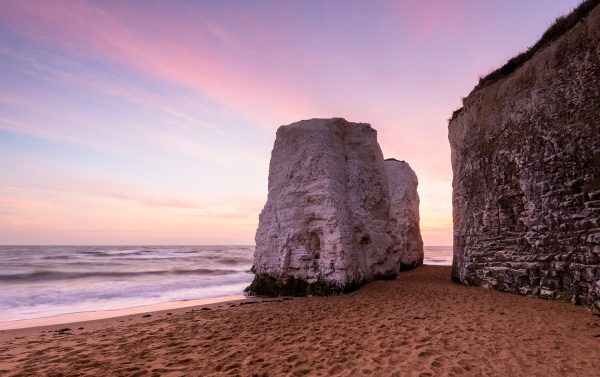 By getting close to the cliffs you can make them appear dominant in the frame.

This is an old file from 2012 I came across while putting this post together which reinforces what I was saying about luck. This was taken at the end of November when the sun happens to be completely obstructed by the cliffs but because of the simply epic sunrise we got, it still works as the colours radiate out from behind the stacks. The retreating tide has nicely smoothed out the sand and a well placed boat anchored off the coast adds another point of interest to the shot. 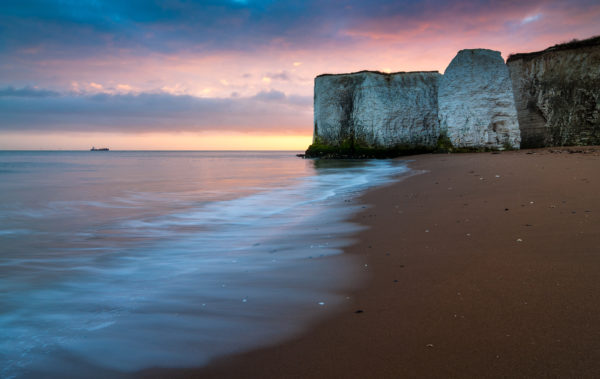 One of the most impressive sunrise displays I’ve seen.

This is the view overlooking the bay at sunset in the middle of June. Yes, a sunset for once! Only on the longest days of the year does the sun get to set in this position. Again, I coincided my visit with high tide to declutter and simplify the scene. 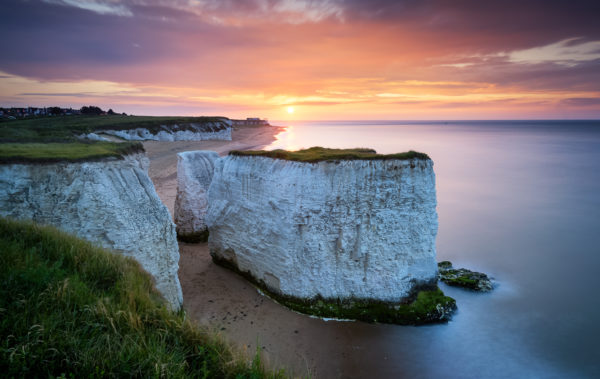 A Sunset for a change on one of the longest days of the year.

Thanks for reading and I hope you like the colourful, minimalist shots I like to shoot here.