Thanks for visiting and reading my write-up of a recent dawn to dusk photo trip. I’ve included the best photos from the day which started in Greatstone and ended in Dungeness as well as my favourites from earlier trips to give readers a more rounded view of the locations. Hope you enjoy..!

Greatstone is a coastal village on Romney Marsh which I like to visit for it’s sand dunes. The dunes are not as tall as those found at nearby Camber Sands but it is a much quieter and more peaceful location. The beach faces due east so it is a perfect sunrise spot all year round and therefore an ideal place to start this morning. 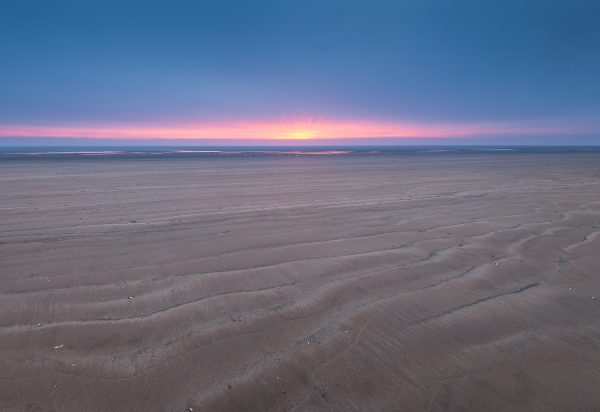 I arrived before dawn, hopeful of a colourful sunrise like the one I encountered above on a previous trip. That morning was also quite special because of the ‘sandblasted’ beach caused by the receding tide, I haven’t come across this again.

The sunrise on this Saturday morning however was one of those ‘nothing special’ occasions. I used this time instead to test out my new 2x teleconverter for my 70-200 lens by looking south towards Dungeness. Unfortunately most of these shots were ruined by something called ‘heat wave distortion’. I hadn’t experienced this before and initially I thought there was something wrong with my technique as all my shots were really blurry. Only after zooming in on my Live View could I see that the distant buildings were shimmering, perhaps from the heat of the nuclear power station or from the Sun as it began to rise? Either way it was time to move on…

I walked up onto the dunes as the Sun slowly rose above the horizon and began looking for shots. I found a nice view looking into the light with a foreground of sand dunes and backlit marram grasses. The contrast and flare though was too much for my filters so I took two frames and combined them in Photoshop. I waited a while to see if a dog walker or two would kindly enter the frame and maybe round off the shot but for once, they could not be found. 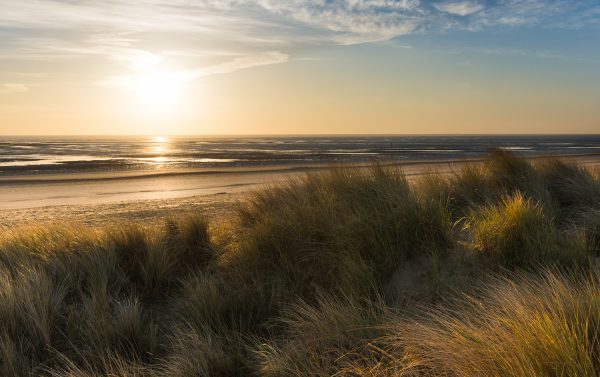 Just after sunrise on the Greatstone sand dunes

From on top of the dunes there are a couple of viewpoints in either direction that I was hopeful of getting. I have shot these on overcast days before and I had wanted to replicate these on a brighter day to compare. However, there was no comparison. The moodier shots I had gotten earlier were much better, the clear skies of this morning didn’t work well so I’ll share these ones below. 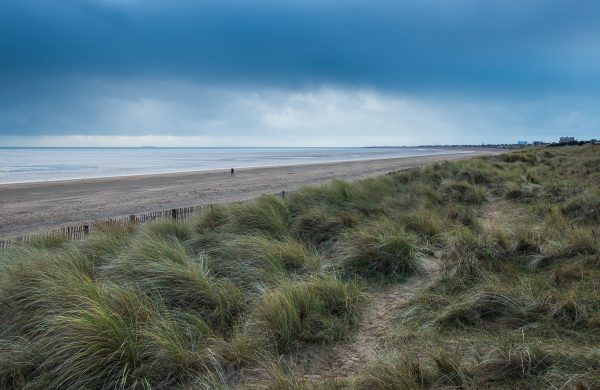 Greatstone-on-sea with Dungeness visible in the background 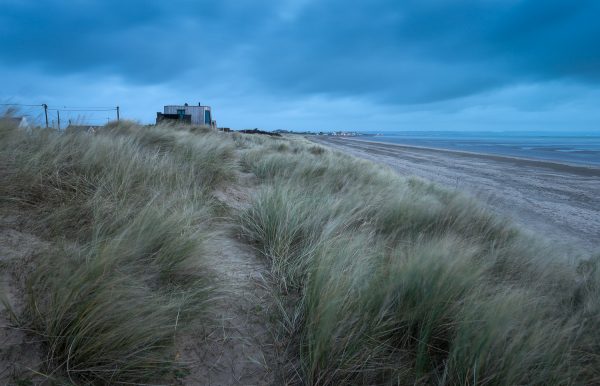 With the Sun getting higher and the light getting harsher I changed tactics and set out shooting for black and white. The contrasty light, typically a disadvantage to colour photography is an asset for dramatic monochrome images. With the wind starting to pick up I put on a Neutral Density filter to get some striking long exposure images. I made my way to the southern end of the beach where there is a newly constructed designer property. By shooting in the moving grasses I tried to create an abstract feel with just the top of the building poking through which I think works quite well. 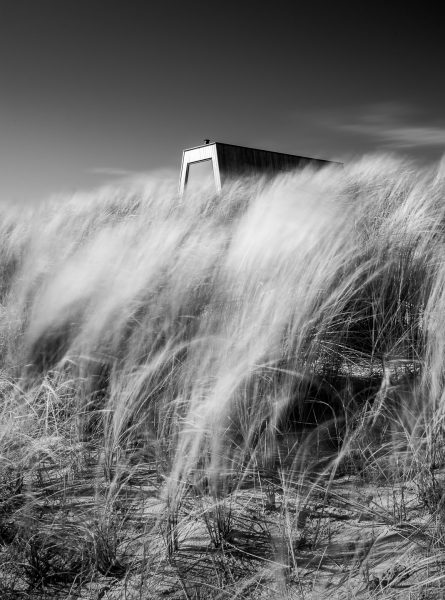 By now it was time for lunch and a quick nap before the short drive down the coast to my next location; Dungeness. Dungeness is a very popular spot and rightfully so, it is a unique landscape that I have visited many times before. Here are a few of my favourite shots from previous trips which I notice have all been shot quite close together in the area with the old boats and huts. I had time for another quick walk around this area and I was a little disappointed to find that the hut and boat from these first two shots are a bit worse for wear, but I guess exposed on the coast that’s to be expected. 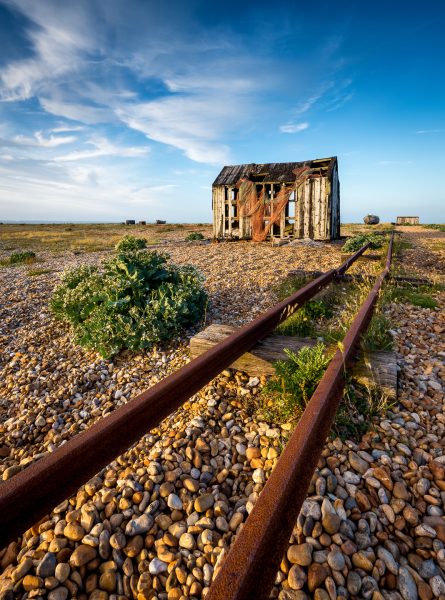 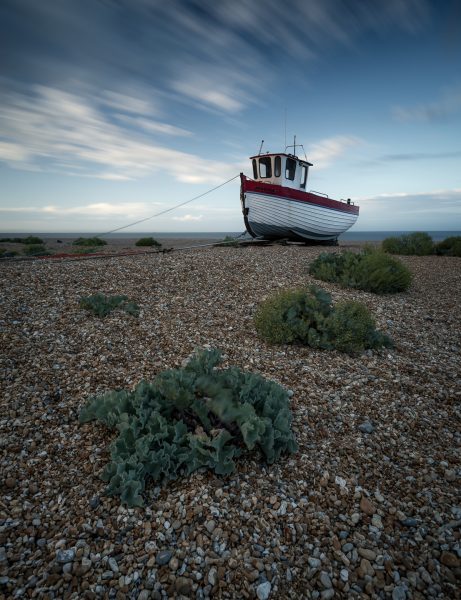 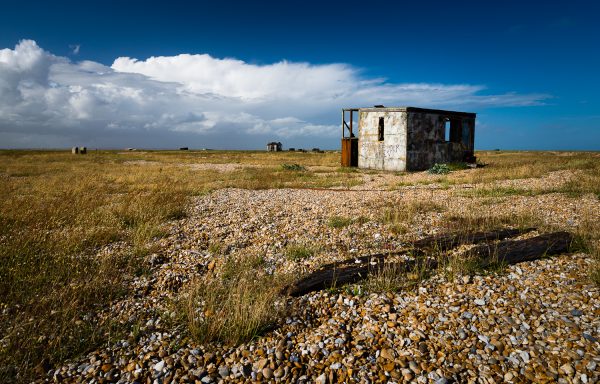 Feeling like I’ve covered this section of the beach before, I planned to try and make use of the other section near the lighthouses and power station. I’d also brought along with me some torches, the plan being to find a view that would allow for some light painting at dusk later on. I would need to compose the shot around a dark foreground that I would lighten with my torch and then have an illuminated building at dusk for balance. While walking around the New Lighthouse I found a set of rocks I could use for the foreground, with the lighthouse in a midground and the power station in the distance soon to be lit up. 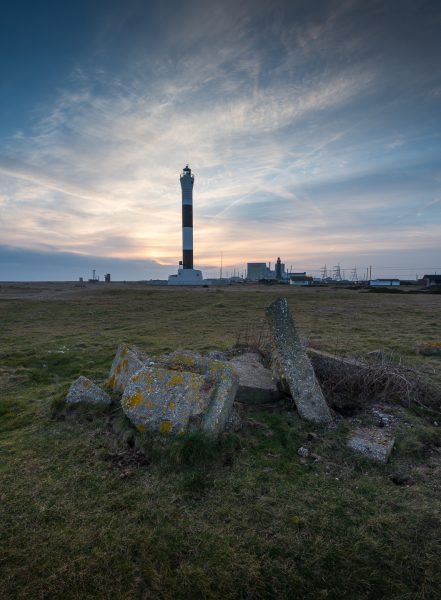 The new lighthouse at Dungeness

While waiting for the light to fade, a hazy colourful sunset caused this panoramic scene in front of me to come to life. Levelling my tripod and quickly adding a grad filter to my 24-70 lens, I made 4 seperate shots that I could combine in Photoshop.

With this distraction over I could now return to my light painting! With Blue Hour starting I took a multitude of shots, each time playing with the different torches and the direction in which to shine them onto the foreground rocks. My small LED torch was the best, creating a strong neutral light that I could adjust easily. It was getting completely dark and I was just about to pack up when the New Lighthouse suddenly was lit up. This new element needed a slightly different composition which wasn’t easy to find in the darkness, also the rocks needed much more torch light to illuminate and as such I’m not sure about the result yet. At least I know now about the the lights so I can plan for it a bit better next time.

This was the last shot of a long but fruitful day on the coast. 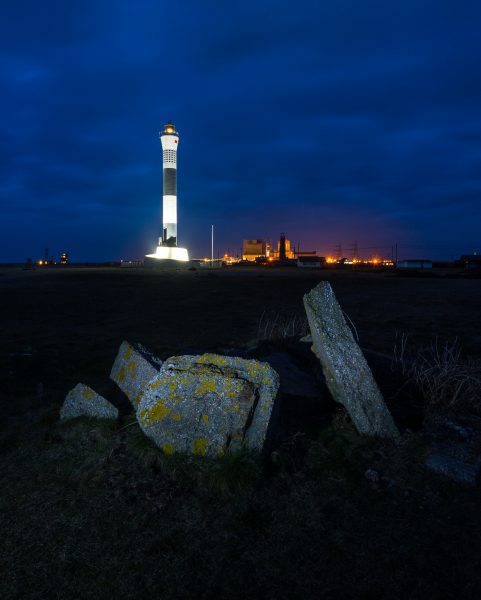 The lights of the power station and new lighthouse at dusk