I’ve just returned from the best part of a week away in Bamburgh, Northumberland. This is my second Winter photo trip after escaping to the epic West Cornwall coast last year. I like going away at this time of year as there are less people about so you’ll often have the place to yourself, accomodation is much cheaper and the coast can be wild and stormy; my favourite. 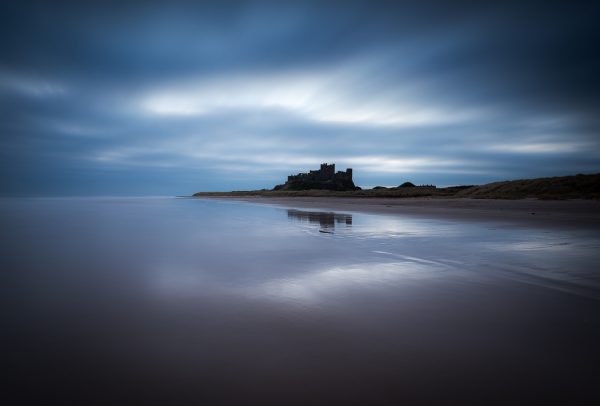 I arrived shortly after dusk and checked into the Victoria Hotel in Bamburgh. I set out to quickly gather my bearings and look around the village which consisted of a couple hotels and shops. The castle dominates the view, in its size and the fact it was the only thing lit up at night. The rest of the village was in pitch blackness which is not quite what I’m used to in Kent. I began to walk along The Wynding but I was unprepared to exploring in the dark so I turned back although the sound of the coast was impressive and wet my appetite for the following morning.

One shot I was keen to get while on this trip was of Bamburgh Castle reflected in the wet sand at dawn, ideally with a nice bit of colour in the clouds. Being based so close to the Castle I was able to come down every morning of my 4 night stay but with little success, most mornings were clouded over with only the last morning offering any sky detail to make use of. Later on that day I went on to explore Seahouses, Beadnell and Embleton Bay nr Dunstanburgh. The latter has lots of potential for creating an original view of the Dunstanburgh ruin with its arching sandy beach and high dunes, definitely one to come back to in better conditions. 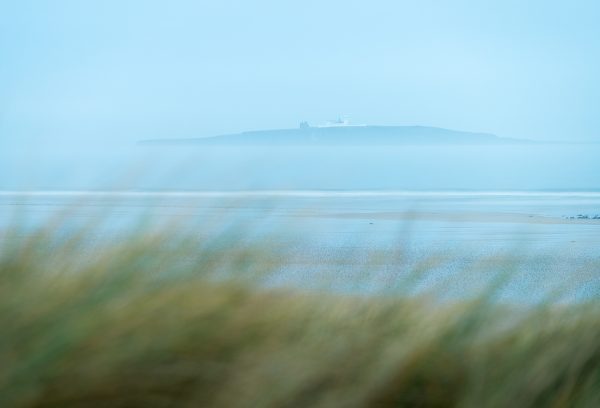 Through the dunes at Seahouses looking towards the Farne Islands 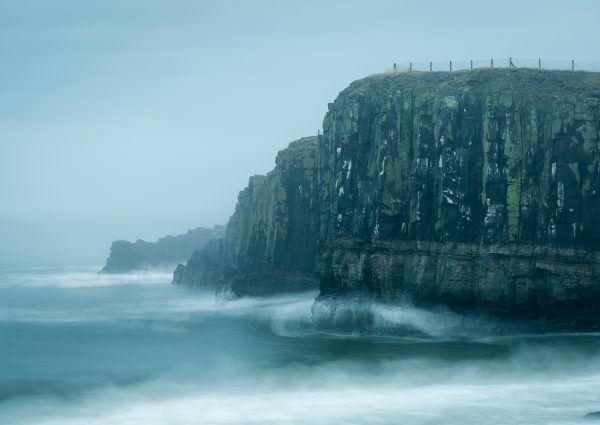 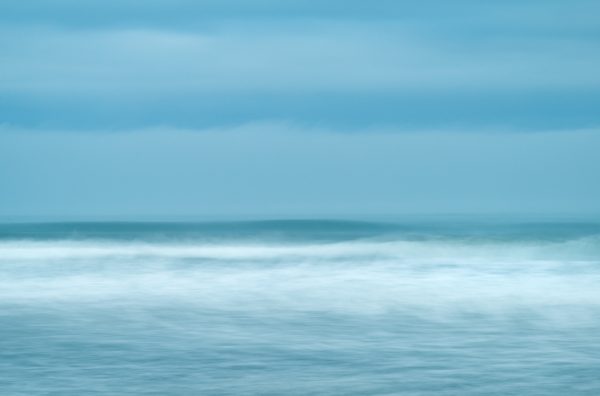 A cloud line emerged above the waves at Embleton 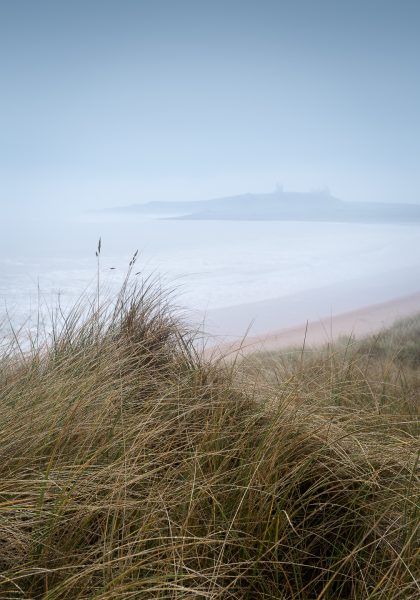 Dunstanburgh ruin from the dunes at Embleton Bay

With the doomed Bamburgh sunrise all over with I could set off to St Abbs Head just over the border in Scotland. I had been recommended visiting here for the lighthouse primarily and after looking at Flickr I saw some nice work from people I follow so I knew there was a lot more to the location. I arrived at the lighthouse car park in terribly calm weather, no wind and clear skies which made a change but for a location so dramatic, probably for the worse. I had fun exploring the tall cliffs, finding a few angles of the lighthouse that could work in different light. By the time sunset arrived I was treated to some nice colour behind the lighthouse, at this point the beacon came on adding the final ingredient. 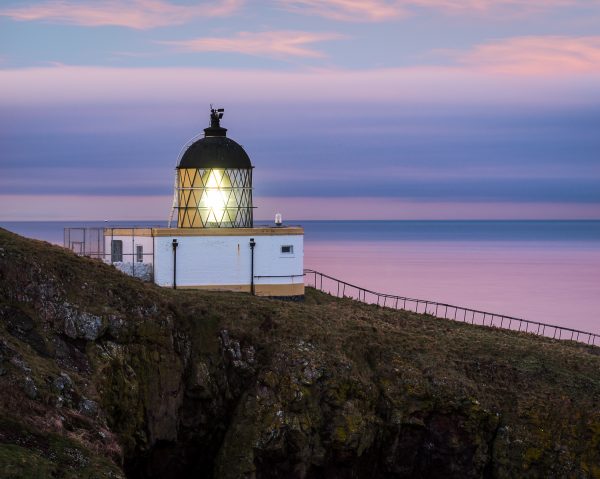 The Bamburgh sunrise didn’t materialise again so I ventured on towards Budle Bay, just a bit further up past Bamburgh beach. I remember coming across an article by Jon Gibbs extolling the merits of Budle Bay so I was keen to check it out. Walking through the golf course I could see these massive sand dunes up ahead, unlike anything I’d seen before. I scrambled up to the top, careful not to make new footprints in the sand. From above there were good views looking inland and out towards Holy Island. 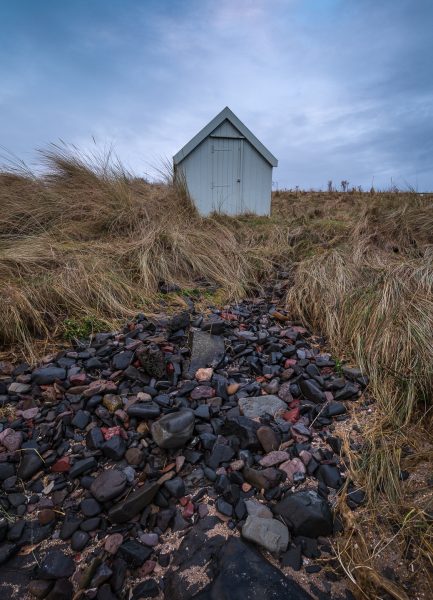 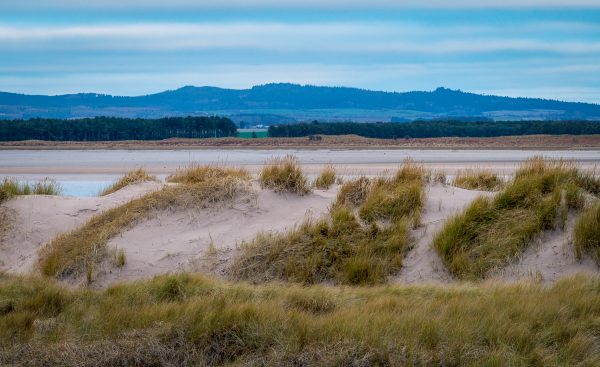 Making my way down on the Bay itself I was treated to a rare glimpse of light which made all the difference in this long exposure looking towards Lindisfarne Castle. 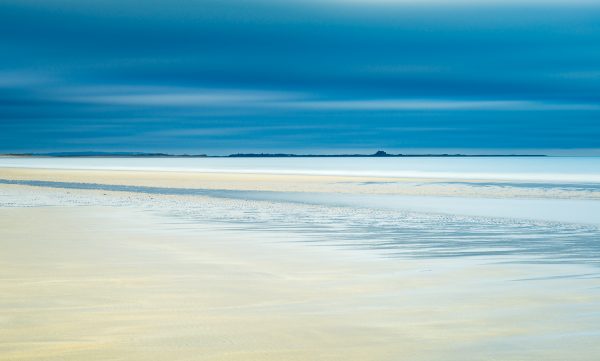 For the second half of the day I would make the pilgrimage over to Lindisfarne Castle on Holy Island. According to the tide times I could stay until 5pm, just enough time to photograph a sunset if I got lucky. Unfortunately the clouds stayed all afternoon but I had fun shooting the views looking back towards the mainland.

The view towards Guile Point and Bamburgh Castle from Lindisfarne

This was it, the last chance to get an image from Bamburgh at dawn. The forecast had changed in the night from the usual overcast kind to a clear sky at sunrise which had me hopeful of some colour and cloud detail at last. That prediction turned out to be a bit optimistic although there were a few patches in the sky which I could make use of with a long exposure.

That’s it, thanks for reading..!