Welcome to my photography location guide for Reculver on the North Kent coast. Located a few miles away from Herne Bay, Reculver is a very small village consisting of a pub, a new coffee shop and a few hundred holiday caravans. For us photographers though the iconic twin towers of the medieval church built on the site of an early Roman fort will be the main purpose for a visit. I live in nearby Canterbury and have thousands of images taken here; it must be my most visited location.

The front face of the towers can be best photographed from down on the beach. Walk westerly along the sea wall from the car park and you’ll find the small slope down onto the beach in front of the sandstone cliffs. Access is available to this section under the cliffs even at high tide but to get out onto the sand in front of the towers a low tide is essential. 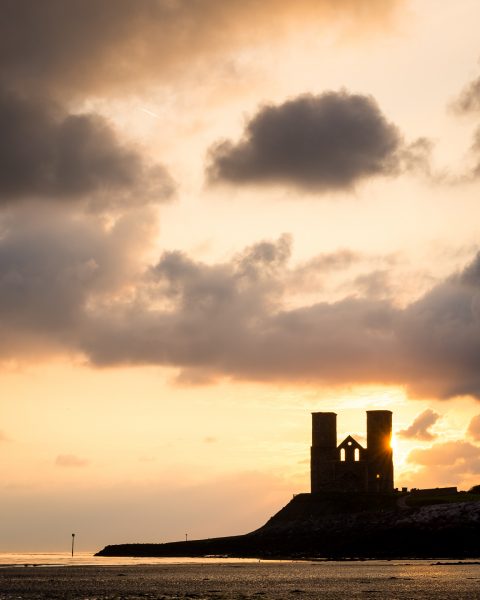 September sunrise behind the Reculver towers

The face of the towers are a magnet for lovely late afternoon sunlight which can make for nice looking images using sand ripples and rocks for a foreground. I prefer to visit at sunrise and silhouette the monument as the Sun emerges above the horizon. If you visit around March or September you can capture the Sun rising directly behind the towers which can look quite dramatic. 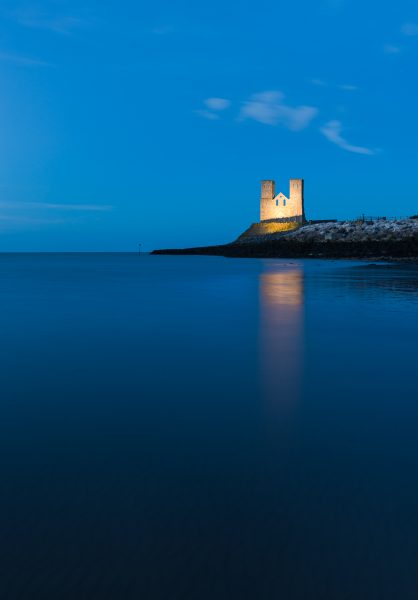 Reculver towers reflected in the sea at twilight

Twilight and the blue hour is a great time for shots here as strong lights illuminate the towers just after sunset. Time the tides just right to have the illuminated church reflected nicely in the wet shore. The ground is plenty firm enough to walk on here but just be careful of standing in the same spot for too long or you might slowly sink in and lose a shoe..! 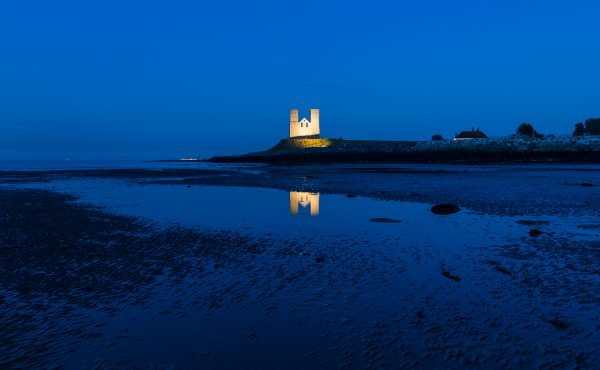 As you walk back from the beach onto the sea wall path there is a fine view looking along the Bishopstone Cliffs towards Herne Bay. In Summer the early evening light can nicely highlight these sandstone cliffs, exposing they’re craggy nature. They’re also home to a noisy colony of sand martins which are a joy to see also. 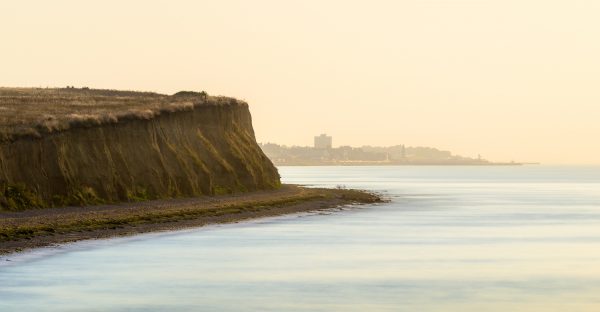 The view of the Bishopstone cliffs and Herne Bay in Summer

Walking back past the car park and further up past the towers you’ll find the site of the early Roman fort; Regulbium. On March and September evenings the Sun will be in the right position to shine directly through the windows of the towers creating dramatic shadows. This view is also ideal to silhouette the towers against a colourful sunset or a starry sky on a clear night. 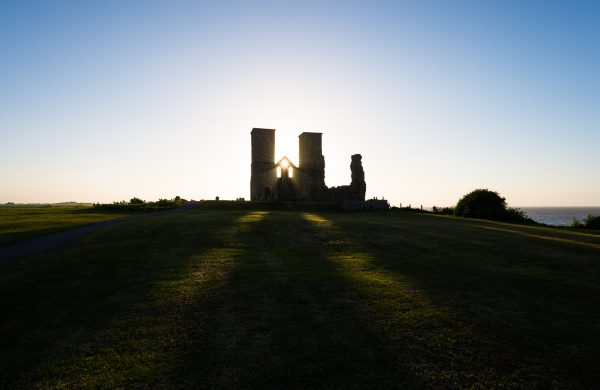 Late Sun shines through the windows of Reculver Towers

Venturing down onto the beach directly behind the towers is my favourite spot in Reculver. The giant granite boulders that help stop the tide from encroaching make for some interesting foregrounds. I like to use their shape and inherent lines to direct eyes to the towers in the background. This can take some manoeuvring in between the rocks so it is best to check the tide times for a mid – low tide. 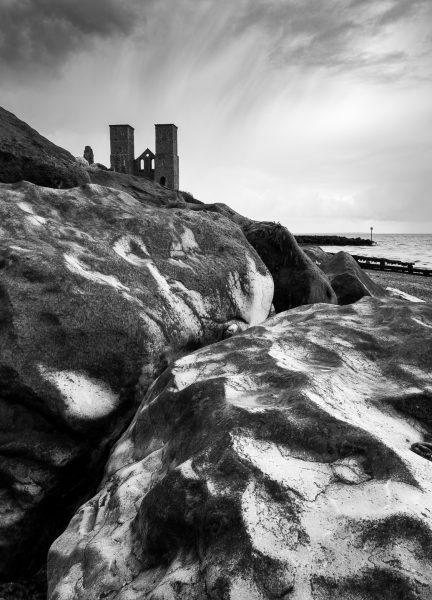 A black and white shot of Reculver Towers using the lines of the sea defence boulders as a foreground. 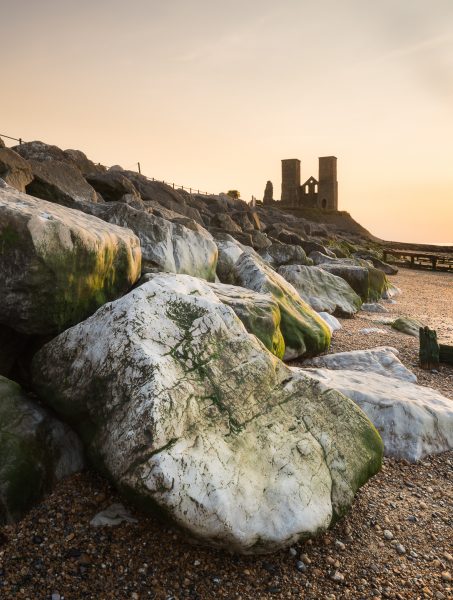 A hazy sunset behind the towers on Reculver beach

During the Summer months the Sun will set to the right out to sea. In the late afternoon this will provide a nice side light to the rocks and towers while becoming an interesting addition to compositions later on at sunset. 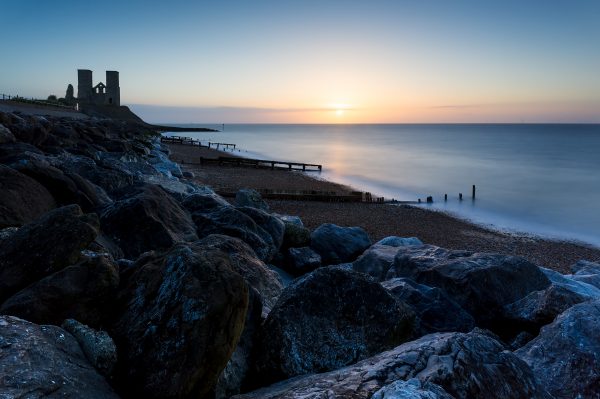 The beach is constantly changing in this section behind the towers as shingle is moved by the tide. Certain smaller rocks can become submerged and others can move around the shore line opening up new compositions usually with each visit. 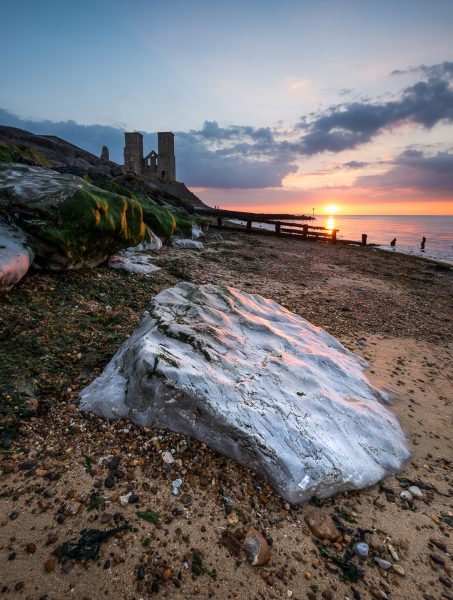 The North Kent coast is a great place to watch storms as they pass along the North Sea. This section of coast from Reculver to Birchington-on-sea is intersected with numerous groynes each with their own red topped sea post which I love to use in my seascapes. 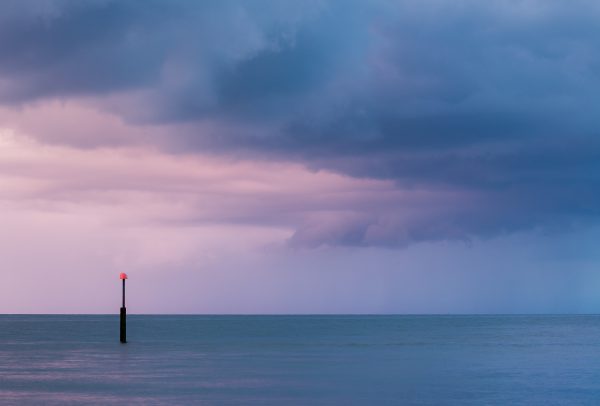 Storm clouds pass by at twilight on the North Kent coast 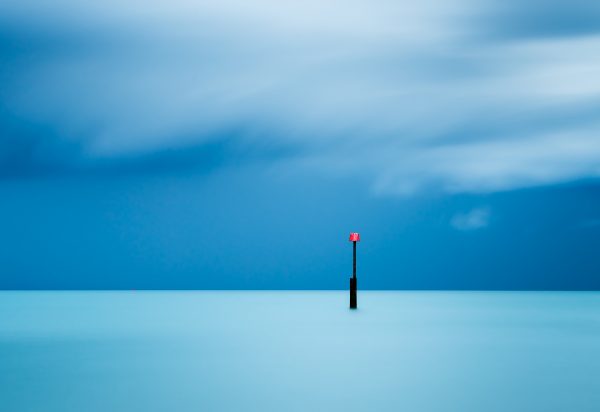 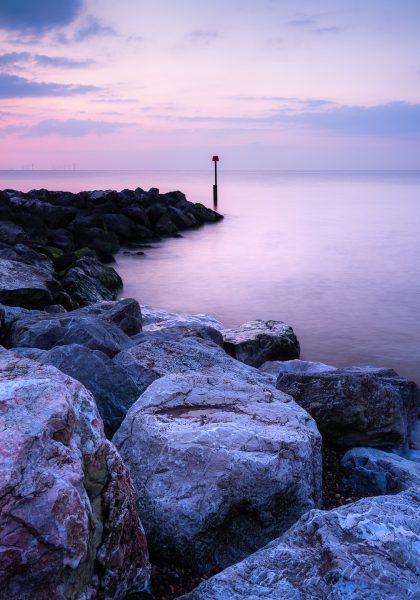 A calm twilight seascape on the Kent coast nr Reculver

If you happen to visit on an overcast day or you have some time to spare before sunset try looking for details amongst the boulders. They are also many weathered wooden groynes that make for good abstract and detail shots too. 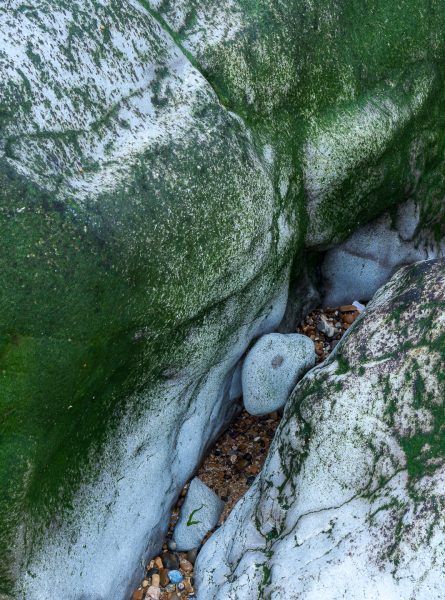 A rock detail made on the beach at Reculver

I hope that has given you some ideas for your next visit to Reculver. Thanks for reading..!